Skiing is one of the best winter hobbies out there, but it can come with a hefty price tag. If you're on a budget, buying used skis is a great option to get you out on the slopes without breaking the bank.

Keep in mind, however, that buying used skis versus new ones will require you to do a little bit of extra homework. While skis are built to last you multiple seasons, they still have an ultimate shelf life. It's important to know what is and is not acceptable when it comes to wear and tear on a pair of used skis. We asked ski expert Ryan -- our buddy who spends his weekends working at Forerunner Ski Shop in Killington, VT -- for a few pointers on how to properly evaluate a pair of used skis.

Skis are designed to be able to endure numerous tunes and wax jobs each season. But how do you know if your ski is at the age where it's been worked on too much?

It's important to note that small scratches on your base are nothing to freak out about. Bigger, deeper gouges in the ski, however, may need a ski tech's help to repair them. 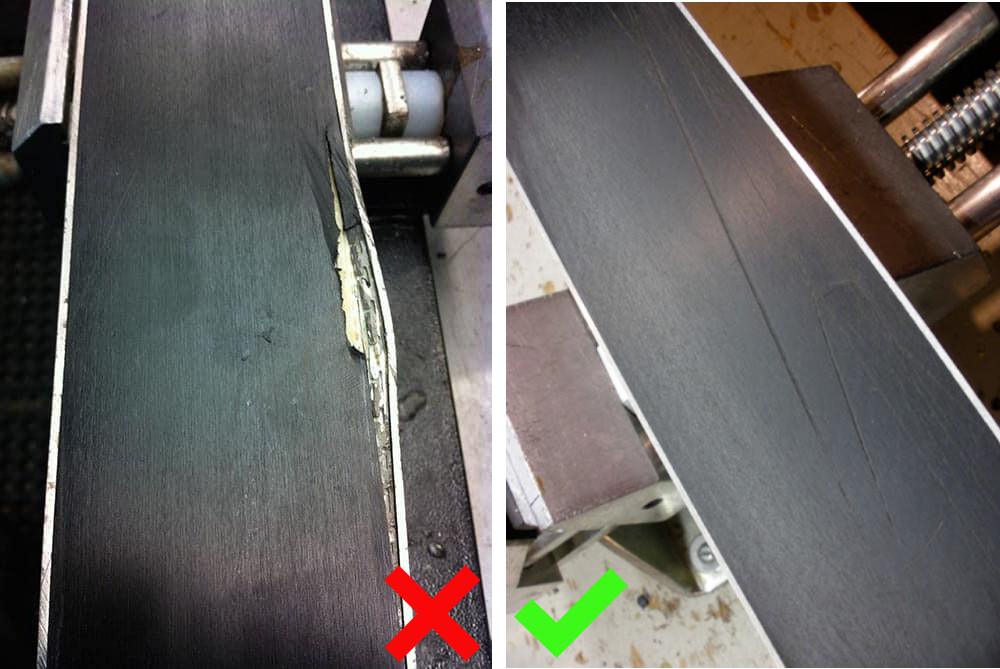 Ryan's tip: "Think of the difference between harmless and serious scratches on your base like this: a light scratch on your arm that leaves a faint red mark, versus a deeper cut that breaks the skin -- and requires a Bandaid!"

During the offseason, it's common for a pair of skis to build up a bit of rust, particularly along the edges. Note: don't panic if you see rust on pair of used skis.

Ryan says: "Rust can be removed from the ski when tuned. What’s more important is inspecting the edge after it’s been tuned. I’ve had a pair of skis whose edges were fully covered in rust, and I still use them."

A pro tip to prevent rust buildup is to wipe down the edges of your skis after each use. Also, be mindful of where you store your skis -- hot and humid climates are not their friend. In other words, don’t keep your skis in the attic!

Edges are one of the main things you should ask about when shopping for used skis.

Advice to buyers
Be sure to ask the seller the following questions about their skis' edges:
1. How many times have you sharpened these skis in their lifetime/how many times per season?
2. What type of conditions did you mostly use these skis on?

Edges, at a certain point, can become too thin. If you've ever overheard people talk about their old skis, you've probably heard them say things like, "there's barely any edge left," or "the edges are getting pretty thin." It's true that, after much use and many sharpens, ski edges will thin out. Pictured below are a couple of examples of edges that are starting to thin out:

All that said, ski racers actually prefer thin edges. Thinner edges allow you to ski at faster speeds. If you're a beginner or a recreational skier, we would not recommend that you seek out a pair of skis that have particularly thin edges.

You should also take into account the type of conditions you mostly ski on. If you live out West and mainly ski powder, you won't need to sharpen your skis as often. If you're an East Coast skier who regularly encounters ice, then routine sharpening is a must.

Another factor to consider when buying used skis is whether or not the skis have ever had their bindings remounted.

Ryan says: "A good rule of thumb is 3 times at most. It also depends on how close together the holes have been drilled. It’s best to only re-drill your skis one time if possible, in my opinion."

The main issue with over drilling is that eventually you'll run out of space to drill new holes. Furthermore, if you drill a new set of holes too close to an old set, you run the risk of the ski becoming unstable.

Before you make a used ski purchase, be sure to ask the seller how many times they've remounted bindings onto their skis.

Sell or Scrap? How to Buy Used Hockey Sticks