How to Break In a Baseball Glove: Three Methods
SidelineSwap Team May 25, 2018

Breaking in your glove is an essential part of getting ready for a new baseball season. When it comes to technique, players around the MLB use conventional and unconventional methods to break-in their beloved gloves. From wooden mallets and hot water, to shaving cream and utilizing the freezer, players swear by their personal methods for molding their gloves and making them ready for game day. If you're curious to try out a new method, here are some of the ways the pros are doing it. 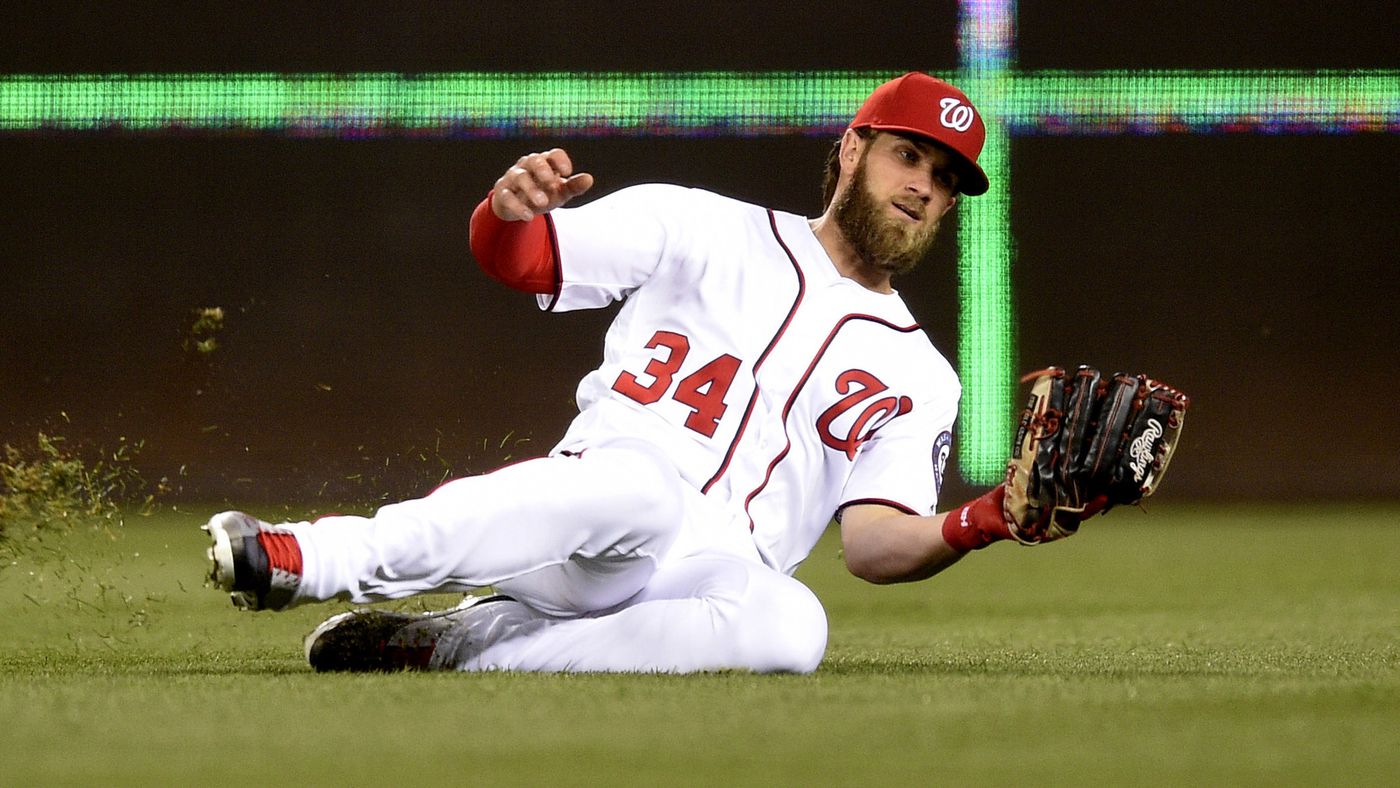 When Bryce Harper was drafted in the summer of 2010, he put his mitt in the trusted hands of his father, Ron, who has a legendary three-day process for breaking in gloves.

The elder Harper starts by filling a bucket with water. Then, he packs the glove’s pocket with three baseballs and ties it closed. Once the glove is stuffed, he submerges it for 24 hours.

After a day of soaking, Ron removes the glove, unties the string wrapped around the mitt and removes the baseballs. Then, it’s hammer time. If you want to try this at home, best to take it outside. Put your wet glove on the ground and then pound it with a sledgehammer to work in the leather.

After you beat it in, put the baseballs back in the glove and re-tie it. Submerge it one more time for 24 hours. After another full day of soaking, remove your glove, let it dry out, and it should be ready to use.

“It gets it exactly how I like it,” Bryce told the Washington Post. Another tip from Harper: to prevent the leather from cracking and to keep it supple, use saddle oil on the glove throughout the season.

What You’ll Need:
-A bucket of warm water
-A cup
-A wooden or rubber mallet 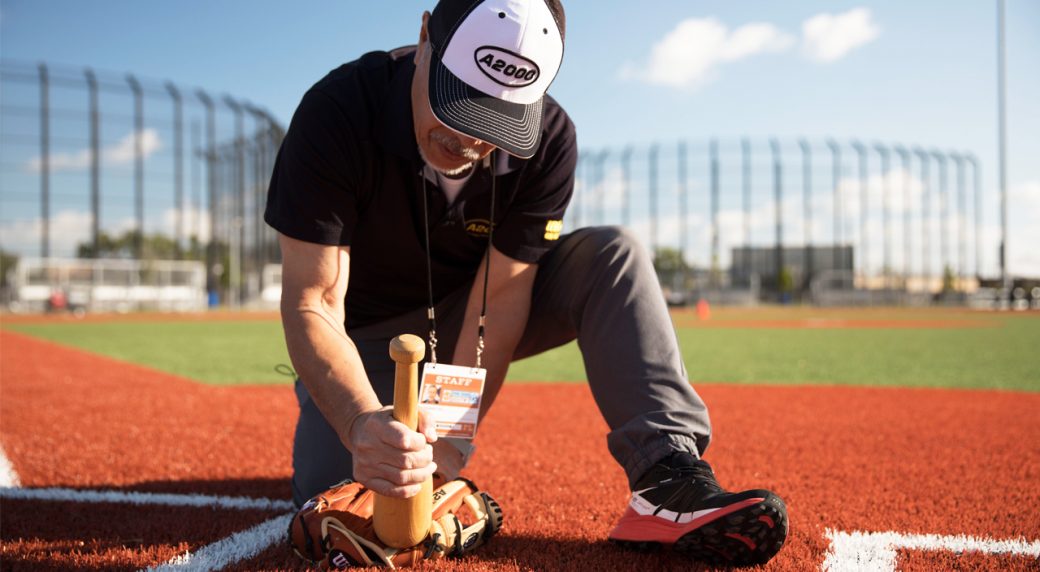 The Glove Guru at Wilson is a man named Shigeaki Aso. With over 30 years of experience in creating the baseball equipment we see MLB players using every night, Aso is an expert on how to break-in a baseball glove.

The first step in Aso’s method involves a bucket of warm water that sits at 150-160 degrees Fahrenheit. Using a cup, Aso pours the warm water over the front and back side of the glove.

After the exposure to the water, Aso places the glove onto a small pad and begins to fold and press down on the glove to soften the leather.

His next step is to use a wooden mallet to pound the glove and give it a flex along the heel. The pad underneath provides a cushion so that the leather will not be damaged.

Players who prefer a tighter glove with tension opt to skip this step though, as they don’t want the flex or break along the heel.

Similarly to the Harper Family method -- albeit a little less aggressive -- Aso takes a mallet to the pocket, pounding the leather until he feels it’s soft enough to allow the baseball to rest in the center of the glove comfortably. He recommends repeating this process routinely throughout the season until the player feels the break-in is complete.

Breaking in with Shaving cream: The ARod method

What You’ll Need:
-Shaving cream
-A buddy to play catch with
-Access to a freezer 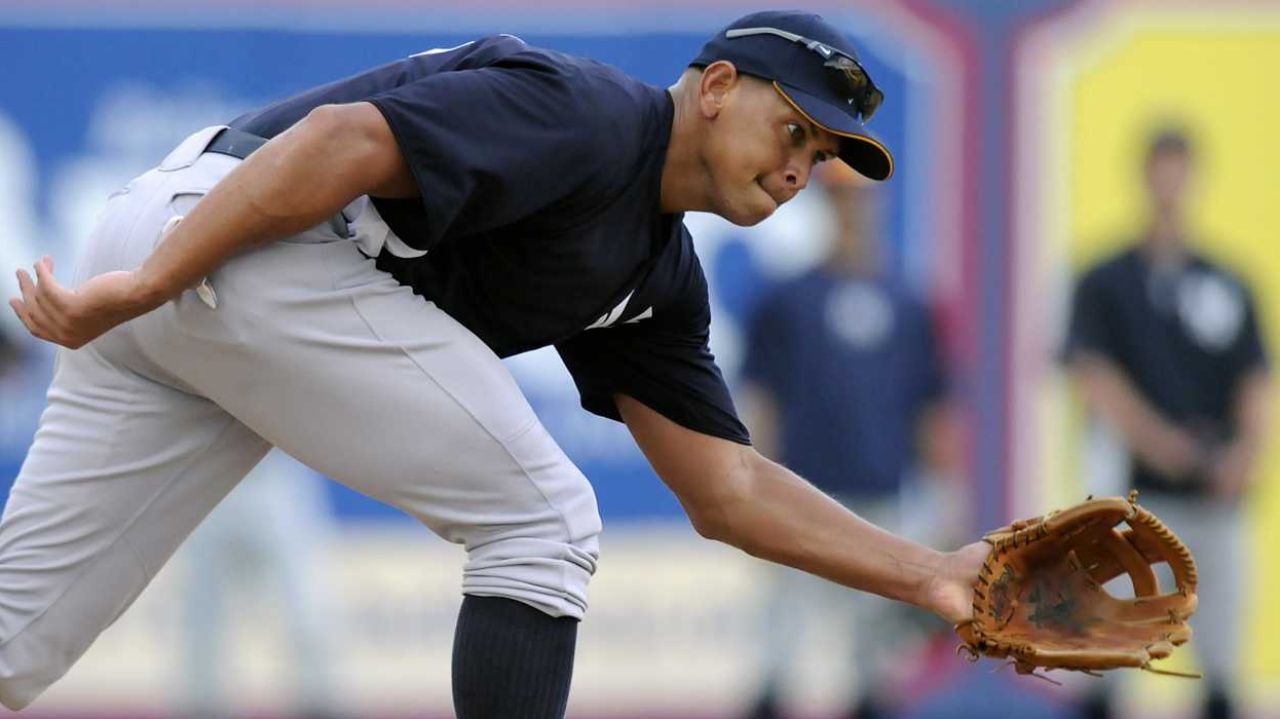 When Alex Rodriguez was playing baseball, his process for breaking in a glove was a year-long ordeal. As a result, he typically carried three gloves with him at all times: his current glove, his glove from the previous season (as a backup), and the glove he planned to use the following season.

The glove that he prepared to use the following season went through a multi-step process before ARod deemed it game ready. You’ll never guess what his secret ingredient was to break in his gloves. Give up?

It was shaving cream, of all things. Rodriguez was a firm believer in shaving cream’s ability to break down leather. He applied it regularly to his gloves throughout the season, shaping it up for its debut the following year.

In addition to this ritual lathering, ARod would play games of catch pretty regularly with his future glove. Catching thousands of throws would loosen up the laces of the glove over time. Once the glove loosened to his liking, he’d restring it and continue having these throwing sessions with his teammates. Rodriguez would perform this cycle three times over the course of a season before he giving the glove his stamp of approval.

Regarding in-season maintenance, he noticed that the summer heat routinely took a toll on his glove. The glove would become heavy, and lose its shape due to the humidity. As a result, ARod came up with a unique solution to this problem.

Before every game, he would place his glove in the freezer and remove it roughly 30 minutes before first pitch. The freezer would harden the leather and keep the rigid shape that ARod preferred to play with during the season.

So, in conclusion: there are several methods to the madness (including using your oven!), but in the end, it boils down to preference. Our philosophy? We say do what you’ve got to do.

What stick does Evgeni Malkin use?

What are the Best Baseball Gloves by Position?